Stud principals Doug and Barbara Tozer returned to the auction arena after five years selling bulls privately and via Helmsman to achieve a top of $16,000 and average $6897. The sale was met with strong support from clients, with 44 of 55 selling under the hammer, before clearing a further seven after the auction for $4000 each. The auction may have been put on hold for five years, but the return could not have been any more the same, with the gallery of buyers, close to that of the last sale in 2010. 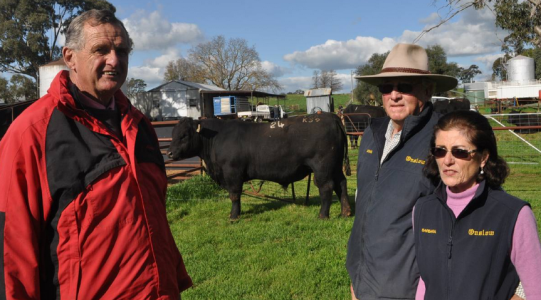 Frank Bragg, “Rossgole”, Aberdeen, set a strong pace for the sale buying seven of the top sires which averaged $6286, while return buyers SM and NE Heggarton, “Bramshot”, Wallendbeen paid $6000 for a new sire.

The Heggartons regularly top the annual Gundagai weaner sale with steers by the Onslow bulls.

Onslow Angus Bulls are available for private sale throughout the year.